Ann (Edmonds) McCay’s paintings convey a sense of space and have a strong narrative element. Settings are theatrical, often portraying man-made structures within natural vegetation. The eye is led along paths, through windows and into doorways.

The familiar is made strange through the use of intense colour and light. The juxtaposition of images and archetypal nature of the figures inspires the viewer to create their own story.

Ann is also an established portrait painter. She has exhibited in the B.P Portrait Competition and at the Royal Society of Portrait Painters.

Ann graduated with a degree in Fine Art from The University of the West of England in 1983. She then worked as a professional artist in southern Spain and London before moving in 1998 back to Shropshire where she grew up. Since then she has continued to paint and exhibit regularly. She is married with two children. 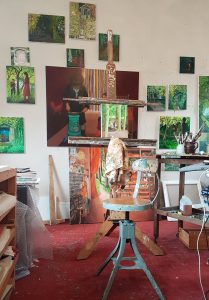 Find a selection of paintings turned into cards at Dry Red Press here.